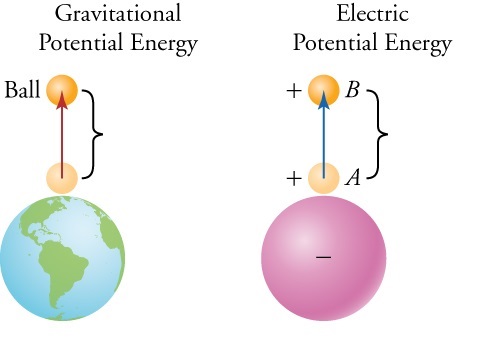 Example: The ball is at a height h above the surface of the earth because of its own The position has gravitational potential energy. The charged body q is located in the electric field of charge Q, has  energy called electric  potential energy. In other words, we can say that Energy required increasing the distance between two charges to infinity or vice verse. The potential energy of the electrified body is proportional to the amount of charge of the body. We use following formula to find the magnitude of electric potential energy.

Electric potential energy is a scalar quantity and Joule is the unit of it 1J.

Work done by the electric field

If the force is a conservative, then the work done can be  expressed in terms of a change in potential energy. Potential Energy of two point Charges. Example: Suppose we have two charges Q and q  separated by A distance r. We now displace charge q along a radial line from point A to point B The force is not constant during this displacement. Example:
If we bring a charge Q from infinity and place it at point A the work done would be:

It has units of: The potential difference between two points A, B in the field equals the work done against the field moving a unit positive test charge from point A to point B:

The potential difference is called the voltage Thus, the electric potential is the same everywhere on this spherical surface). It is called an equipotential surface. Potential of a Charged Sphere Example: The positive plate is at a potential of +9 V and the negative plate is at 0 V. What would the equipotential surfaces look like between the plates?
They would be a parallel set of planes!
Let the p py lates be separated by a distance Δd. The electric field strength can be expressed over the voltage

From this relationship we can derive a unit of electric field strength, volt per meter. She is equivalent to the newton unit per culon.

We now have 4 equations which kind of look similar: