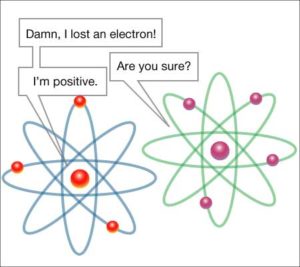 Electricity has a very long history.The Greek philosopher Thales of Miletus (640 – 546 B.C.) is sometimes credited with being the first person to notice that amber will pick up bits of dry grass or straw if it is rubbed with a cloth. (Amber is a honey-colored mineral which is actually fossilized tree sap.)

William Gilbert  is remembered today largely for his book  book a special chapter on “corpora electrica” is included other bodies similar to amber. Ben Benjamin Franklin labeled “resinous electricity” as negative, and “vitreous electricity” as positive. By choosing the polarities this way, Franklin forces us to say that electrons carry a charge of negative electricity. Coulomb is perhaps most famous for the law of physics bearing his name.  Coulomb’s law describes the relationship between force, charge and distance.

Often we notice that the hair is picked up during combing. This is because the comb gets charged when it is rubbed.This charge that is created when two objects are rubbed against each other is called static electricity.

Example 1: When we rub our hairs with a comb, and then try to attract small pieces of paper, they’re attracted by the comb. The picture below shows how the amber electrifies and attracts feathers, the same happens with a plastic rod. The water jet refuses when we bring it to the charged rod.

If you take a piece of polythene and rub it with a duster, the polythene becomes charged negatively. The duster becomes positively charged. If a rod of cellulose acetate is rubbed the charge on it is positive. When two different materials are rubbed together, often electrons are transferred from one to the other. If this happens the two materials will become oppositely charged, and since UNLIKE CHARGES ATTRACT, the two materials will attract each other. Electrostatic charge is a fundamental quantity like length, mass, and time. The arrow shows the atom (green colored) that left the electron and became a positive ion.

The effects of static electricity are explained by a physical quantity not previously introduced called electric charge. Putting “charge is quantized” in terms of an equation, we say:

q is the symbol used to represent charge, while n is a positive or negative integer, and e is the electronic charge, 1.60 x 10-19 Coulombs.

The SI unit for charge is called the coulomb (C). In this way we can calculate how many charged particles are needed for the body to havecharge from one culon: Example: When rubbing the body with fur on it, the electron passes

. How much electricity did the body electrify in that case?

Small paper rabbits should be made. Place two large books a little distant from each other, cover them with a glass plate to look like a bridge. When cutting paper bundles, put them under the glass. Take a silk cloth and, before rubbing the glass, say a few magic words to make the students more interesting.

Explanation: When you rub a glass cloth with a silk cloth, it is charged with static elecricity so that it begins to attract pieces of paper, but when contacted with glass rabbits lose the charge and fall to the ground. By rubbing, the procedure repeats itself, so it looks like a rabbit is constantly jumping.

Try again, but without magic words!