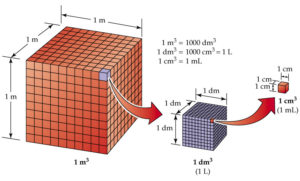 It is clear that it is not enough to use only one measuring unit for a particular physical size. So offten, besides basic units, larger and smaller units of measure are introduced.

To indicate these units, we use prefixes that express how many times a certain unit is larger or smaller than a basic or derived unit of measurement.

Prefixes are used for easier recording since it is complicated to write too large or too small numbers with a lot of zeros. Thus, when we measure some of the magnitudes such as space distance in the universe or the size of the molecules or atoms and subatomic particles, it is easier to use prefixes.

What do the prefixes mean?
We all use the computers today and we all heard of the word “byte”. Byte is a unit of measurement for the amount of data in the computer.
The same prefixes are used: kilo, mega and giga, which because they are binary rather than a decade, do not have the same value as prefixes for our measurement units, but their values are approximately the same.

See table showing the unit for length. All other basic and derived units of measurement have larger and smaller units of measure.
We can see from the following table the prefixes for smaller and larger units.