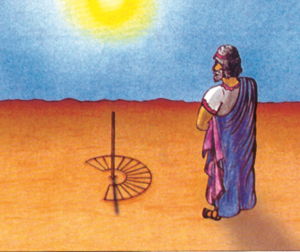 As the history of people tried to measure the physical quantities and used the measurement units and instruments for measurement. The development of traffic has led to the connection between the countries. Thus, the need for the introduction of the same measurement units in the whole world for easier trade and communications has arisen. The need for measuring some sizes was long overdue. People measured, length, time, and determined the measurement units of the stated sizes themselves. Initially, they were measured by using parts of the body as length units as measuring units. They were measured by step, foot, tread, or hand range. There was no single unit of measure for this or any other physical size. Different people we know have different lengths of foot and step feet, as well as a range of hands. There was therefore a need for a more universal measure. One of the oldest units of length measurement used in the ancient world was the ‘cubit’ which was the length of the arm from the tip of the finger to the elbow. This could then be subdivided into shorter units like the foot, hand (which at 4 inches is still used today for expressing the height of horses) or finger, or added together to make longer units like the stride. The cubit could vary considerably due to the different sizes of people. The yardstick
(Henry I, thumb to nose)

As early as the middle of the tenth century it is believed that the Saxon king Edgar kept a “yardstick” at Winchester as the official standard of measurement. A traditional tale tells the story of Henry I (1100-1135) who decreed that the yard should be “the distance from the tip of the King’s nose to the end of his outstretched thumb”. It had long been realised that a universal standard of measurement was needed, and that it should be a natural constant. In 1791 the French National Assembly decided in favour of a standard that would be one ten millionth part of a quarter of the earth’s circumference. The survey which established the length was made from Dunkirk, in France, to Barcelona, in Spain. The work was long and difficult and was carried out during a time when France and Spain were heading to war. On a number of occasions the surveyors were arrested as spies and nearly lost their heads! From this survey a platinum ‘end bar’ was produced in 1799 which was known as the ‘Mètre des Archives’ and was the master standard for the world’s new measuring system, the so-called metric system.

Initially this new system was rejected by the French people and it only became rigorously enforced from 1837 onwards: by 1870 it was being widely used in continental Europe. A sundial is a device that tells the time of day  by the apparent position of the Sun  in the sky. In the narrowest sense of the word, it consists of a flat plate (the dial) and a gnomon, which casts a shadow onto the dial. As the Sun appears tomove   across the sky, the shadow aligns with different hour-lines, which are marked on the dial to indicate the time of day. Around 325 BC, water clocks began to be used by the Greeks, who called this device the clepsydra (‘water thief’). One of the uses of the water clock in Greece, especially in Athens, was for the timing of speeches in law courts. Some Athenian sources indicate that the water clock was used during the speeches of various well-known Greeks, including Aristotle, Aristophanes the playwright, and Demosthenes the statesman.

About 4,000 years ago in Egypt, the first watch was invented. This object could only measure time when it was sunny day. There is an inventor who can point. The sundial is responsible to tell us what time of day it is. Basically, the sun casts a shadow on a triangular pointer called gnomon. The sundial is like a clock with numbers around. The shadow sun reveals the time of day.

Obelisk: Although many cultures around the world from the Assyrian to the Mesoamerican employed the obelisk form, only ancient Ekypt worked in monolithic stone, almost always red granite. In Europe during the sixteenth century, hourglasses were used to measure the duration of the masses in iglesias.La duration depends on the amount of sand and the size of the drop hole.

Galileo pendulum: Galileo’s discovery was that the period of swing of a pendulum is independent of its amplitude–the arc of the swing–the isochronism of the pendulum. Now this discovery had important implications for the measurement of time intervals. Huygens developed a balance spring watch in the same period as, though independently of, Robert Hooke. Controversy over the priority persisted for centuries. A Huygens watch employed a spiral balance spring; but he used this form of spring initially only because the balance in his first watch rotated more than one and a half turns. He later used spiral springs in more conventional watches, made for him by Thuret in Paris from around 1675.

The Egyptians devised the solar calendar by recording the yearly reappearance of Sirius (the Dog Star) in the eastern sky. It was a fixed point which coincided with the yearly flooding of the Nile. Their calendar had 365 days and 12 months with 30 days in each month and an additional five festival days at the end of the year. However, they did not account for the additional fraction of a day and their calendar gradually became incorrect. Eventually Ptolemy III added one day to the 365 days every four years. The brightest star in the Egyptian sky was Sirius. Sirius disappeared for a 70 day period and reappeared on the eastern horizon on July 19th which also coincided with the Nile floods.  This was therefore the date of New Year’s Day for the Ancient Egyptians. The Ancient Egyptians had a great interest in the passing of time and how this effected vital events such as the annual flooding of the Nile.

The ancient Egyptians measured the mass of devices that were similar to today’s weighing scales. Kitab mizan al-hikma by Abd al-Rahman al- Khazini on balances and weighing instruments, Mizan Al-Hikma, ca 1270 CE Al-Khazini completed his Book of the Balance of Wisdom in 1121 at the court of Sultan Sanjar at Merv. The comprehensive balance was a highly accurate weighing machine consisting of a two-meter-long metal beam with a shorter crossbeam that connects to a suspension device. Five bowls serve as scales and the red object between them is a movable weight. Thanks to its precision, the balance was also used for determining the specific gravities of a range of materials. One of the earliest thermometers was invented by Galileo approximately 400 years ago to measure water temperature, but devices to measure air temperature were not developed until much later. In general, the idea of an air thermometer is based on the fact that liquids and gases expand when they are heated and contract when they are cooled. The first air thermometers used the same basic mechanics as many of the instruments used today: a glass tube filled at the end with mercury or colored alcohol that rises through the tube as it is heated. The first thermometers contained water, but later versions switched to alcohol or mercury because their freezing points are lower.

Anders Celsius was born at the 27th of January 1701 in Uppsala. Celsius became famous for his recommendation in 1742 to divide the temperature scale of a mercury thermometer at 760mm mercury air pressure into 100 degrees, where 100 is the frozing point and 0 the boiling point of water. Because of the detailed fixation of the measuring circumstances and methods this definition was more exact and enabled a better temperature measurement as with the actual practices, introduced by the glass manufacturer Gabriel Daniel Fahrenheit (1686-1736) and the aristocrate and biologist René-Antoine Ferchault de Réaumur (1683-1757). Later the reversion of the Celsius scale with 0 as the frozing point and 100 as the boiling point of water was introduced, and with this modification it became widely spread.

The Kelvin scale was proposed by William Thomson, 1st Baron Kelvin in 1848. He proposed developing an absolute, thermodynamic temperature scale, using its base point as absolute zero. Temperature calculation has become an important part of everyday lives. Before we leave our homes, we check the temperature on a weather channel in order to see if we need to carry a jacket. Kelvin and Celsius are two units of temperature measurement that are used in fields such as physics, thermodynamics, engineering and astronomy. Both are a part of the International System of Units.