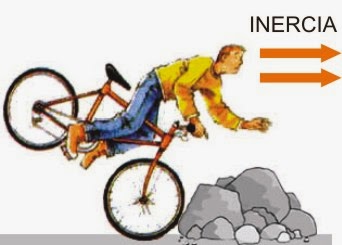 A body lying on the ground will not run on its own. Not even a small ball on the table or the ball on the grass, will not start until a it is moved by a force. On the basis of which we can conclude that the speed of a body changes only under the influence of something else.

– Let’s say a man is driving a motorcycle, which is moving because it is driven by the engine power. While moving at the high speed the motorist will reach an obstacle in form of a wall, which as a result would stop the motorcycle but the motorist would fly over the wall and continue to move in the initial direction of the motorcycle. – Let’s say we have a situation where a child is riding a bicycle and then stumbles upon a dog. In order to prevent hitting a dog, the child presses the breaks of the bicycle. The result of that would be that the bicycle would fall to the side, and the boy would continue to move in the initial direction of the bike until it falls.

The body’s ability to maintain its speed is called inertia. The mass (m) is taken as a measure of inertia.If there is no other body acting on a body, then its speed does not change.

When we pushing a shopping cart, we do it with a little effort. However, in order to push a car on the road, we need to make much more effort. When the object is motionless, a certain force is needed to overcome its inertia in order to move it. The higher the mass of the body, the greater the force to move it or to stop it from moving.
Italian physicist Galileo Galileo started and Isak Newton formulated the law of inertia which reads:

Each body remains in a state of rest or in a uniform straight-line motion until some force forces it to change that state.

There are many examples of inertia and the law of inertia is subject to all movements both on Earth and in the Universe. – In July 1994, comet Shoemaker-Levy-9 hit the Jupiter. When the comet got closer Jupiter broke into more than twenty parts. All these parts (as the picture shows) had the same direction. They were moving uniformly in the direction of inertia.

We are introduced to the mass as the size. In order to measure the mass, we need to know the unit of the mass. Mass is the measure of inertia of the body and with it we can compare the bodies of different masses.

– Comparing the mass using the inertia. Let’s compare the mass of two weights placed on the smooth surface of the table. Between the weights is the springs. If we press the threads with palms to one with the other so that the spring is pressed, and then leave them, the springs would start to spread rapidly and start pushing the spheres out of each other, so that they are start to move in the opposite directions.
We can then conclude that the ball m2 is more resistant to changing its state of rest, meaning it has a greater mass.

The mass can be measured by inertia.

From experience we know that it is more difficult to stop or move the body of a larger mass and higher speed. These two units connect the unit, called the impulse of the body or the amount of motion.

The impulse of the body p depends directly on the mass m and the velocity v.

The pulse unit is: