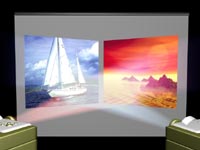 By the simplest definition, light would be a phenomenon that allows us to see. We did not have to study the light to know its existence, because the light is as old as the universe. Our awake eyes always need light, which is why we turn on a light bulb when it is dark.
In any case, light is an interesting phenomenon, and its nature has been a puzzle for centuries. Light is something that illuminates darkness. To that extent, light is part of our everyday life so that we do not think about it too much, but simply use it.

However, behind the most common movement we do to turn on the lamp, is the century of continuous technical development and study of the nature of light, its formation, the speed of its movement, considering whether this speed can change, and the like. It is still unclear though, whether the speed of light was always the same. Scientists learned to redirect and break the light beams to get laser beams. They also managed to reduce the speed of light (under certain conditions) and stop the light beams and conserve them.

By studying the light technological discoveries went from candle to laser and from the magnifier to the Hubble telescope, our artificial “eye”, whose glimpse wanders the Universe.

Isac Newton set the theory that the light is the flow of very small corpuscle particles, which movement is subject to the laws of mechanics. At the same time, Christian Heagens set his theory that the light is a wave. The wave nature of the light was later confirmed by the theory of reflection, refraction, diffraction, and so on. Later research determined that light is both, wave and corpuscular (particle). A particle of light is called a photon.

Light waves are a type of electromagnetic wave, similar to radiotalas.